We are looking forward to welcoming you in Poznan

The third edition of the RailFreight Summit took place on 1, 2 and 3 September 2020 in Poznan, Poland. Due to its geographic importance, the region in and around Poland is developing in rapid pace. A network of hubs is in the making, connecting countries such as Poland, Czech Republic and Slovakia to Western Europe, China, the Baltic states and the Adriatic coast. At this event, high-level speakers shared their insights and knowledge on this topic.

Keep me informed about next edition

Speakers at the event were:

Topics to be discussed

Around 150 logistics specialists attend this conference. You will meet logistics providers, operators, shippers and carriers but also academics, policymakers and lawyers and consultants visit our events. It is an international event with visitors from Europe and abroad.

At this event you gain knowledge about the latest developments, understand the routes and connections and learn how to grasp the current business opportunities in the region. Of course, you will also leave with new contacts and another experience.

Have a look at the attending organisation

The latest news about rail freight in Poland

The Polish company PKP LHS is an infrastructure and railway undertaking on its own line. “There are many advantages of working in this way. We do not face the problems that other companies face. We detect, and solve things right away”, explained Aleksandra Adamska, member of the Supervisory Board at the company.

What started with a single rail connection in Poland in 2005, has grown to a wide network of intermodal connections in Europe and beyond. PCC Intermodal is involved in some of the most popular and known services and continues to enter new markets. This year, it celebrates its 15-year anniversary.

Rail Baltica could lift 5,000 trucks from Polish-Lithuania border per day

More than 5 thousand trucks per day currently cross the border between Poland and Lithuania. Imagine of this could be shifted to rail. It is an ambition al but unrealistic, as the megaproject Rail Baltica has set its eyes on an interoperable railway network connecting Poland with the Baltic States.

What is the share of rail in Poland? And how has the rail freight market developed over the years? Download the factsheet about the situation of rail freight in Poland! 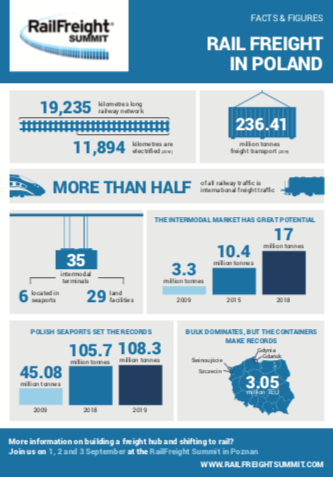 Poland is at crossroads, not only between West and East, but also between the Baltic and Adriatic Sea, between the Baltic States and mainland Europe and between two major corridors connecting the most important transport hubs of Europe. Each year we strike down at one of these hubs, setting the stage for an international gathering of all those involved in this intermodal network. We have been in Wroclaw and Gdansk. In 2020, we are in Poznan.

The RailFreight Summit is made possible by