How NUNNER stepped out on the New Silk Road 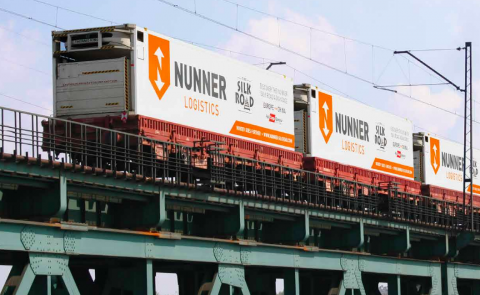 In just a few days’ time, Amsterdam will join the growing number of European locations with a direct rail freight service to China. It will be the latest chapter in the successful story of NUNNER Logistics, and in particular its rail expert Erik Groot Wassink, a speaker at next month’s Silk Road Gateway Poland Summit (March 20-21).

Groot Wassink is Director of Special Products at NUNNER Logistics, an agent of the Austrian-based Rail Cargo Group, which now operates in 25 locations across Europe, including his own base in The Netherlands. Responsible for all of the company’s rail activities, Groot Wassink is rightly proud of the company’s progress in harnessing the potential of the New Silk Road and driving its future prospects.

NUNNER has been active in rail logistics since the early 1990s, originally to and from the CIS (former Soviet) region and central Asia, and in 2015 it moved its first containers to China by rail.

March 7 is a date long marked in Groot Wassink’s calendar, as it’s the departure day of NUNNER’S first Amsterdam-China service. The Port of Amsterdam’s TMA Terminal will be the starting point for the train’s 11,000 kilometre, 16-day journey to the trading hub of Yiwu in Shanghai region. Reflecting The Netherlands’ diverse export market, it will be carrying Dutch-made machinery, mineral fuels, pharmaceuticals, technical equipment and chemicals.

So when did NUNNER first identify the potential offered by rail freight services from China to Europe – was there a ‘lightbulb’ moment of inspiration?

“In 2013 we saw a new market on the horizon, to and from China, and this accelerated after the bankruptcy of Hanjin,” said Groot Wassink, referring to the collapse of the Hanjin Shipping company, which was officially declared bankrupt in February 2017. “For us it is not only Europe; we at Nunner also see possibilities from China to Central Asia and China to Russia,” he added.

NUNNER’S progress in the East-West logistics sector has indeed been rapid, and Groot Wassink highlights a number of critical factors during this phase, not least the importance of state support in China.

“Most important for our progress in the rail sector on the Silk Road is, of course, the investments from the Chinese Government to invest in alternative solutions, alongside the traditional maritime routes from China to Europe,” he said. “Through these investments in infrastructure and, as I earlier mentioned, the bankruptcy of Hanjin, brought the critical mass and the success of the Silk Road that we see today.

“Also, the outlook for the coming two years is showing a huge growth in volumes as well in operational platforms – at the moment we also see monthly developing new routes along the Silk Road.”

So what does he view as the greatest challenges facing a supply chain that is this big and covers so many different stakeholders across the different countries on the China-Europe rail axis?

“The biggest challenge on the Silk Road is mainly the transit points which have difficulties coping with the huge volume growth especially in terminals and rail infrastructure in western Europe,” said Groot Wassink, who is also acutely aware of the economic and cultural barriers that persist.

“The biggest economic issue is the political embargo in Russia on some EU products. For example, fruit, vegetables and dairy products could bring huge volumes from west to east, and that would be good for the balance in the traffic.”

Groot Wassink will be speaking on day two of Silk Road Gateway Poland, an event taking place in the Polish city of Wroclaw, and he believes it is vital for companies in western Europe considering rail freight to develop a wider logistics network in eastern European states such as Poland.

“I think this is very important because of lack of drivers in the logistic markets and next to that rail transportation is a sustainable solution,” he said. With that in mind, he is also clear on what he thinks will be the ‘game-changer’ to ensure future services become more frequent, reliable, efficient, safe and secure.

“The biggest change in the coming years will be that because of the shortage of drivers,” said Groot Wassink. “Costs will increase enormously, bringing critical mass from road to rail. With the right volumes you can offer, frequent, reliable and efficient services, not only on the long haul, but also on the shorter distances. And last but not least, the rail is also a sustainable and green solution for the environment.”

The parties signed a letter of intent for the sale in November 2021. The acquisition was approved by the Polish authorities on 16 January 2023. PKP Cargo said in Polish media that “both Cargotor and PKP PLK are involved in the planned infrastructural investments in the Małaszewicze Transshipment Area on the border of the European… Read more ›

Why Poland? The importance of Poland for the rail freight industry cannot be denied. It plays a crucial role on the New Silk Road, and it has some of the most important ports in Europe. But also within Europe, the country has many roles to play, with connections to almost every corner of the continent…. Read more ›