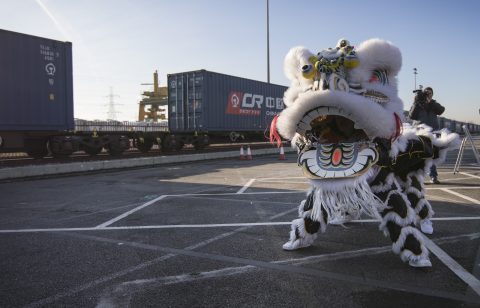 A prevailing focus on the Europe-China northern rail freight route is detracting from the possibilities offered by southern Europe and Asia’s other diverse economies, says Professor Richard Griffiths, one of the world’s leading Silk Road experts.

His book, Revitalising the Silk Road (2017), is considered one of the foremost examinations of the entire Silk Road project, with its rigorous analysis of the Chinese government’s motivations for setting in motion the Belt and Road initiative. Prof Griffiths will be sharing some of his observations when he speaks at the Silk Road Gateway Poland rail freight summit in Poland from March 20-21.

Wind back to 2013, and Professor Griffiths had been doing research in China as part of the Silk Road Centre of European Studies. It was this work that gradually persuaded him to start looking closely at the economic ‘nuts and bolts’ of what was really happening on the ground in China. Also around this time, while teaching in summer schools in Beijing, he was seeing scores of new high-speed rail links springing up in the country.

“I wrote an article saying ‘Look, these trains are coming, so maybe we (the west) should start thinking about establishing these overland routes. That was about a week before President Xi Jinping made his famous speech about opening up the New Silk Road,” said Prof Griffiths, who is Emeritus Professor of International Studies, at Leiden University in The Netherlands.

“The question for me was this: what is actually going on? What are the Chinese doing? What does it all mean?” he said. “And all of the things I was reading were about China’s intentions, for instance is it a form of invisible imperialism, at whose expense, and what are the geopolitical consequences of it? But nobody was answering my questions. Nobody was saying what it meant in terms of the speed of the traffic, the actual costs of building the Silk Road. So in the end I thought that as no-one was answering these questions I was posing, I would do it myself and write the book.”

He makes the case that for China, the Silk Road is really all about one thing – power. Not so much power in terms of influence but power as regards energy: “The book essentially asks:  ‘What exactly is China doing with this Belt and Road initiative and what are its probable implications for the countries that are involved, rather than what is China’s intention vis-a-vis the United States, vis-a-vis becoming a global power?”

To that end, his argument is that while China’s vision is all-encompassing, it is the countries and political establishments of the European Union that need to be doing more to present a plan which fundamentally complements the vision put forward by their counterparts in the Far East. And part of that means recognising that the overwhelming focus on the traditional northern freight axis which has become so popular for countries moving goods to China is only one option.

There is huge untapped potential along the southern route. This encompasses Turkey, with its unique position astride two continents, through Iran, and skirting along the frontiers of Pakistan, Afghanistan and India, and onto China.

“I think we are getting a bit hung-up on this ‘bi-lateral, China-Europe freight train’ exclusively, at least with the discourse, and are ignoring the great potential elsewhere by expanding out from this idea of Europe reaching out into the Silk Road,” he said.

Interestingly, Prof Griffiths offers the perspective that in the bigger picture, rail is not as important to the Silk Road as we think. “If you look at it, there are several things that stand out. One is that railways don’t really have much to do with it. All of these trains are subsidised by local Chinese government and they are running on existing track. Most of the expenditure is actually going into power, electricity generators, hydro-electric power, and so forth. My guess if that if you were to see a breakdown of Chinese state bank sponsoring, you would see most of it is in power. Power and pipelines.”

That said, he strongly believes that for all those stakeholders seeking to drive forward the rail freight element, there remains a gaping hole of opportunity which is not being pursued with anything like the momentum of the northern route. This takes trains from China through the now-familiar corridor of Kazakstan, Russia, Belarus, Poland – the scene of the forthcoming summit – and onto western Europe’s capitals and the vital North sea ports.

“If you think about all these block trains going from China to European cities, the first ones were actually done between Korea and Kazakhstan, when Korea was sending car parts to Almaty,” said Prof Griffiths. “Already within central Asia people were beginning to talk about a trade route between, say, Kazakhstan and Iran. So in between this big picture of the northern routes chugging along into Poland and beyond, underneath you are already beginning to get the criss-cross of smaller routes.”

He believes that it’s time for western stakeholders to start thinking more diversely in terms of opportunities to be harnessed.

“Nobody ‘owns’ the Silk Road, but people are using it in different ways and so I think we need to get our mindset into that and start saying: ‘OK, instead of sending our trains through 5,000 miles of basically empty countryside, there are a whole bunch of people living in Turkey, then you get into Iran, and if you can get your goods down further south you can start to hit the Indian market with its millions,” said Prof Griffiths.

“We need to start thinking in those terms and accelerating it through all these administrative barriers in order to really start galvanising things, which is what Europeans are good at doing and have been doing for a long time.”

So does Prof Griffiths think the Silk Road, as a concept, can yet be considered a success or are we still looking at a fledgling project that is not yet ‘all it can be’?

“I think it is a success, it is developing,” he said. “The ancient Silk Road has brought goods closer to cities, the cities paved the nearby roads and set up markets and places where merchants can stay and trade. Nobody built the Silk Road in that sense, it was just ‘there’ and it was being used. And in a way we are doing that already – we call it globalisation and regionalisation.

“The great problem we have on the Silk Road is that the upper level bit is empty, while the southern middle bit is full of poor people. There are economies that are growing and opportunities that are growing, and we haven’t calibrated our minds or thinking around that conceptualization, but it is happening regardless. Western firms are building land and sea ports throughout the world, just as China is. But China’s project is called Belt and Road, we just downplay ours. So we are actually ‘there’ but in a way we are pushed onto the defensive and we have no real rhetoric that answers China’s vision – a superb image of having a Silk Road that captures everything together.”

He also highlights an interesting anomaly regarding Europe as far as who are the perceived members and beneficiaries of the New Silk Road: “China says the Silk Road embraces 64 countries, and that includes the new eastern Europe members of the European Union, not the rest. But who is building the roads, the railways, the points, in those new European member states? The European Union.” This, he asserts, is a circle that needs squaring.

“Basically there are two projects in eastern Europe to do with infrastructure. One is Cohesion Funds and the other is the TEN-T Corridors. The TEN-T project is supposed to be concentrated on international trade routes, and the Cohesion Fund is about boosting development. What is happening is that we are not really concentrating funds. There are hardly any railways being built in eastern Europe using TEN-T funds. Everybody is building roads – and why? Because TEN-T only gives a maximum of 20 to 30 per cent of the money, and Cohesion funds give around 80 per cent.

“So, given a choice, people would say ‘OK, I can build some domestic roads but why should I build a cross-border railway which nobody in my electorate is really waiting for. There are bottlenecks along these border crossings and upgrades are needed. If this rail traffic really starts to grow a lot, there are capacity problems here at the European end.”

A railway company seeing the sector’s challenges as a fuel for improvement can be exceptional. Additionally, not perceiving the progress of other companies as competition but as a benefit for the rail industry is also an interesting perspective. For METRANS, this is normal since the company attempts to focus on other things like keeping its… Read more ›

The rail freight operator FELB (Far East Land Bridge) has appointed Uwe Leuschner as its new CEO. Leuschner will concentrate on the strategical alignments of FELB Group, Business Development and International Relations. He previously worked as the senior vice president, business development Eurasia at DB Cargo and has more than two decades of experience in… Read more ›